A stunning example of Wright’s mid-century modern Usonian design, the Schultz home is the last designed by Wright in Michigan. Despite its many innovative features, it had not aged well. The foundations had settled, the cantilevered terrace sagged, and the mahogany wood fascias -- which feature a circular pattern reminiscent of Wright’s famous Guggenheim Museum -- were badly deteriorated.

In spring of 2013 a renovation project was launched to restore the house to its original design and condition. But there was a deadline. The work had to be completed before October of 2013, when the house was featured in a tour during the Frank Lloyd Wright Building Conservancy’s annual convention.

The rehabilitation included the needed improvements listed above, as well as roof replacement, bathroom remodeling and the removal of the carpet and sheet flooring. Restoration of Wright’s signature “Cherokee Red” concrete floors and butt-glass corner windows was also completed, as was upgrading of the landscape around the property. 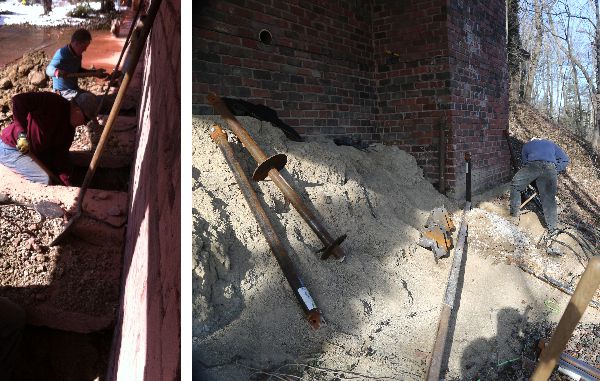 The first work scheduled was the stabilization of the footings. Per the original design, the exterior walls, which consist of 2” rigid insulation sandwiched by two layers of brick, rest on a shallow concrete footing . The footing in turn rests on compacted gravel.

Over the last fifty years, the footings and adjacent concrete floors have settled in two areas of the house. The first is along the south wall of the long bedroom corridor and the second is under the wall supporting the cantilevered terrace.

Kent Companies of Grand Rapids began the process of raising the footings by drilling helical piers next to the footings. Utilizing a unique threaded steel boot anchored under the footings, they can raise the footings back to their original location.

After the existing carpet was removed, the Kent Companies began to mud-jack the concrete floor slabs. The process involves drilling holes through the concrete slabs that had settled and force pumping a slurry under the slabs to raise them back to their original position. 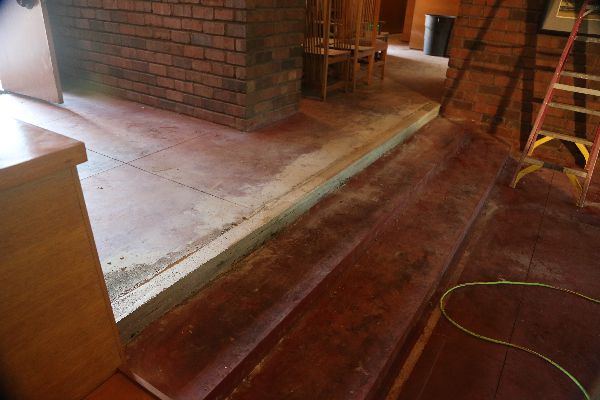 The removal of the carpet had exposed quite a number of large cracks in the concrete floor that had developed due to the settlement of the walls and slabs. While there had been attempts to patch these previously, due to the continued settlement they had redeveloped.

The top step in the living room was so badly cracked, it needed to be saw-cut out and and re-cast.

Because the concrete floor was so heavily damaged, a solid epoxy finish was chosen to cover all the patching. A color was selected that matched the existing stained concrete color. 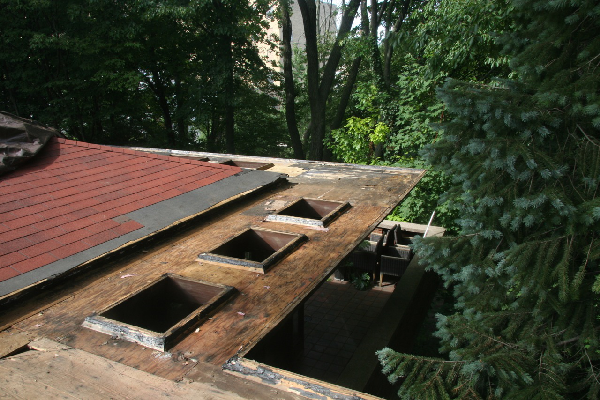 The entire existing roof was removed. While there was only one layer of shingles on the pitched areas of the roof, the flat areas had five different roof layers.

Rotted wood underlayment was replaced and new insulation installed under the new membrane roofing, to assure proper drainage to the roof scuppers. 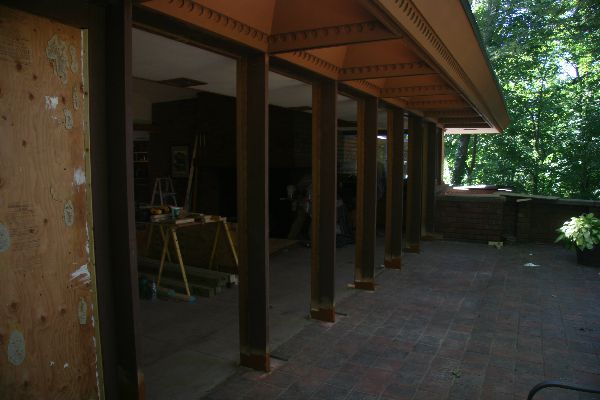  Almost all of the Living Room doors to the Terrace were wedged shut and inoperable. This was due to deterioration of the bottom of wood framing members between the doors.

The entire Living Room roof was supported by temporary columns to allow removal, repair and re-installation of the wood support.

The corner windows throughout the house, which had mullions added when insulated glass was installed in the past, were restored to the original butt glazing.